Early in 1993, the then Chairman Myles Pepper and the committee of Fishguard Arts Society, asked if I would design a 100 foot long by 20 inches deep (3048cm x 50.8cm) embroidery, something on the lines of the Bayeux Tapestry, depicting the 1797 Invasion of West Wales by the French.

This was to be a community project to celebrate the bicentenary of that event, in 1997. I said "Yes, that might be fun" but I knew nothing about the invasion other than a cobbler named Jemima had captured a dozen French soldiers. My research began in Fishguard library without my glasses, to look mistily for a book, any book, on the invasion. By chance my hand landed on an old brown book which, Miss Evans the Librarian, with glasses, confirmed to be about the invasion. I took it home and found it full of written images that were suitable for me to work from. However Audrey walker lent me "The French Invasion at Fishguard" by Bill Fowler, who in turn let me borrow "The French Invasion" by E. H Stewart-Jones and these two books enabled me to get a grip not only on the event, but the history leading to it. I also used books on local costume and military uniform of that period.

Simple things foxed me. Cows: were Welsh Blacks in the fields of West Wales in 1797? A ninety year old man remembered his grandfather spoke of "Rowans" being the popular breed during his lifetime, and that was far enough back for me to use in the cartoon. What roofing material was used on farmhouses, and had Fishguard Square changed much since 1797? Ken Williams, Chairman of the Fishguard Historical Society, lent me old photographs and relevant information which helped me visually to push back the years.

The head harness worn by horses of the military was too complicated to make sense in stitches so, with artistic licence, I drew a simplified version. Were horse tails worn long or were they cropped? Ships posed another problem. Bill lent me plans of the actual vessels used in the landing, so I knew how many masts each ship had, but what did the superstructure look like? In London one day, I remembered a gallery in Albemarle Street that specialised in marine paintings of that period. There on display were pictures of the type of ship I was looking for.

It was time to make written notes to decide which parts of the invasion to depict and how many scenes would comfortably fit into 100 feet. I wrote out forty scenes, but found those with crowds to take up a greater length than the others. Cutting the scenes down to thirty seven solved the problem without loss to the story. That done, I began to make on the spot sketches of invasion landmarks such as Carreg Wastad, Llanwnda Church and farms. This was a jolly bit, mostly in sunshine with gorse bushes in flower and smelling of honey. So far, the research had taken me two months.

Using my written notes, I drew the design onto a quarter-size cartoon in soft 4b pencil. Each scene was designed to keep a continual linear flow from one onto the other to enable disparate images to connect without visually jarring. Bill Fowler kindly checked my design for historical errors and he gave me advice on the sequence of events. During the invasion, various happenings took place at the same time in different areas and this presented quite a challenge. He did suggest I had used too many myths, but I figured without the myths little would be left, so I tactfully forgot that bit of his advice. Making the quarter-size design took me a fortnight and proved to be the fasted bit of the project.
Using three rolls of paper, the next stage was to convert the quarter size design to the full size cartoon. For accuracy I measured each line. A slow process but it was faster than drawing freehand and making amendments.

Because the stitchers were anxious to begin, it was necessary for me to paint and trace the twelve scenes of the first section before completing the whole cartoon. This enabled the women, with the use of carbon paper, to transfer the drawing from my tracing onto twelve frames of stretched cloth. Later I did have help with tracing the second and third sections of the cartoon.

With regard to the use of colour in the design, I aimed to suggest the winter landscape of the coastline during the day and flowing into night. In one complete scene I used cool colours to suggest a late winter afternoon. At the same time, I wanted the colour to be imaginative and exciting. This caused the husband of one stitcher to query the purple horses and another, the green flesh of a frightened French soldier.

From the spring of 1994 I began carefully to select and match colours from swatches of Appleton's crewel wools with the colours of the cartoon. This carried on over a period of many months with writing down the instructions for the thirty seven panels for the stitchers to work from. These gave the colour and shade of each wool to use, down to individual blades of grass and the frogging on a tunic. In one panel alone seventy seven colours were used. Rozanne Hawksley was my principle helper and scribe, and at times my guide, during this long and tiring part of the project. Work often continued through evenings and weekends. At the same time, I was completing the painting of the second and third sections of the cartoon.

Once stitching began, the women regularly visited me with their panels, tracings and instructions to check their work against the cartoon for any omissions or mistakes they may have stitched, or any mistakes made in the instructions. Overall, there were few errors. The cartoon had areas that were difficult to explain in the written instructions. For these Rozanne would place an asterisk with a note saying, "See Liz". These were a nightmare for me to explain and complex and fiddly for the women to stitch. For example, the colour complexities of a horse's mouth. This routine continued until the completion of the embroidery.
The borders were the last to be painted, traced and stitched after the translators had completed the Welsh and kindly checked for any mistakes in the tracing. Captions and decorations act simply to guide and not to detract from the pictorial story.

In completing this brief description of the designing of the embroidery, I would like to say how much I enjoyed working with the seventy stitchers. I am sure they experience embroidery withdrawal symptoms.
Written by the late Elizabeth Cramp 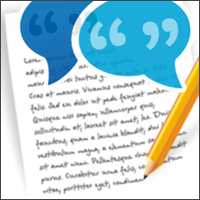